THE TESTOSTERONE OF JPE 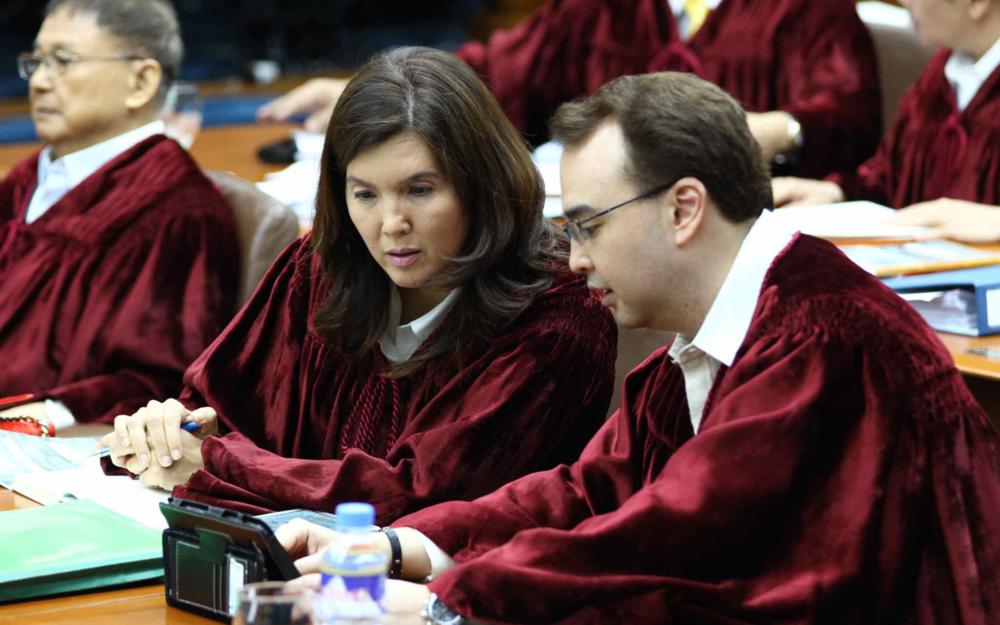 At 89, JPE is still in his elements: fighting some fights of his life. We have grown familiar with the man. For 46 years and counting he graces and continues to dominate the front pages and morning and evening newscasts. His adrenal gland remains autonomous, pumping the needed epinephrine in the midst of a constant brawl. He is our own Aaron Burr.

Never mind his tiff with MDS or Sonny Trillanes. We understand with Miriam because she’s the female JPE, also in constant flux with conflict. She needs it like a burst capillary thematic of her sanguine style of public service. With Trillanes, the guy just simply doesn’t kiss ass like Gringo Honasan and Ping Lacson. He too is the soldiers’ sui generis. We have enough of independent republics in the Senate. Comes presidential election season, they each act presidential.

It is with the Cayetano siblings that eyebrows were raised. What have the Cayetanos done to merit the JPE tempest? It looks like the Cayetanos are not deferential to the old man. The siblings by all accounts take their job too seriously as to challenge the authority of the most senior member of the chamber. The kids just don’t get it. To JPE, he made the Cayetanos.

Rene Cayetano started out as an associate of the first The Firm, the ACCRA, top billed by no less than another Senate colleague Ed Angara. When JPE in his memoirs declared that he founded the law firm in obeisance with his master’s grand plan right after the former’s falling out with his father’s law firm, nothing was heard of from Angara or the remaining living partners let alone from Frank Drilon, an erstwhile managing partner of the law corporation.

Rene Cayetano didn’t come out from law school with outstanding academic credentials unlike JPE, the late Emilio Abello, Angara and Drilon. In the constellation of legal luminaries, Rene Cayetano paled in comparison. He was not even a shadow of his boss.

At most Rene was a legman, a reliable gofer, a fixer rather than a grey mattered counselor. He was seen mostly outside the judges’ chambers instead of preparing briefs too thick as to justify a galactic fee which from the words of the late SC Justice Ramon Aquino are nothing but “making Everests out of molehills.” In his memoirs, JPE recounted his relationship with the Cayetano patriarch:

When I finished my interview with Father Efren Dato, I asked Lt. Noelo Albano to call Renato “Rene” Cayetano, a lawyer, who was my friend.  Before I left my house for Camp Aguinaldo, I instructed Rene to get in touch with Ambassador Stephen Bosworth the United State ambassador to the Philippines.  I wanted Rene to inform Ambassador Bosworth about the action I was about to launch in Camp Aguinaldo against the Marcos regime that Saturday afternoon.

I told Rene, “Never mind!  I will call him myself.”

I asked Lt. Noelo Albano to dial Ambassador Bosworth.  When the United States ambassador was on the line, Noelo handed the phone to me.  I said, “Hello Mr. Ambassador.”

“Mr. Ambassador, I just want to tell you and your government that my men and I are going to announce publicly our withdrawal of support for President Marcos,” I said.  “The Palace has ordered the arrest of my men, and I am now in my office in Camp Aguinaldo with them to call on President Marcos to step down from the presidency,” I added.  (at page 566)

President Aquino at that time was at the residence of Josephine Cojuangco Reyes, her sister, in Wack-Wack Subdivision in Mandaluyong City.  In that visit to President Aquino, I was accompanied by Col. Gregorio “Greg” Honasan, Col. Eduardo “Red” Kapunan, Renato “Rene” Cayetano, a media man Cecilio Arillo, and several others.

I met President Aquino in an open area behind the house of Mrs. Josephine Reyes.  With her were Jimmy Ongpin, Aquilino “Nene” Pimentel, and former Justice of the Supreme Court Cecilia Muñoz Palma, Joker Arroyo, Ramin Mitra, Jejomar Binay, Ernesto Maceda, Rene Saguisag, and others.

I related to President Aquino my conversations with Ambassador Bosworth and with President Marcos.  I also explained to her my instruction to General Ramos.  When I was talking, all those around President Aquino looked at me sullenly, as though they did not believe what I was telling them.

President Aquino asked someone to call Ambassador Bosworth and she talked to him.  All of a sudden, I heard her exclaim, “No! I do not want him here.  I want him out of the country!”  I was certain her remarks meant President Marcos.  She did not want him to remain in the country.  (at page 635)

His most memorable client was Pepsi Paloma who shortly committed suicide after figuring in a national scandal purportedly after being gangbanged by Tito Sotto, Vic Sotto, and Joey de Leon. Shortly before he died and on its account he was catapulted to the Senate, he lawyered for Jessica Alfaro who fled abroad right after the conviction of Hubert Webb and company.

Dead of liver cancer, his daughter Pia seconded him in the Senate and she is successful and well into her second term. Pushing Companero’s luck further, a son was fielded, and notwithstanding the roadblocks strewn by the former First Gentleman, Mike Arroyo, Peter Alan lorded it over at the Senate. Peter Alan generaled the presidential campaign of his colleague, the billionaire Manny Villar, and coined the disparaging appellation, AbNoy.

Now that the numbers of Jackie Enrile in his Senate run are falling, JPE looks at the Cayetano siblings with envy. How could his gofer have raised such outstanding children with national leadership potential? JPE is back in his old self: scheming, devising, plotting…..