KULIGLIG IS A WORK OF GENIUS!

In kneejerk fashion, we read the riot act on the Kuliglig 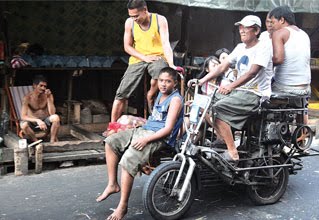 Let’s have second look at it. It’s original like the jeep and the Thais tuktuk and the Chinese rickshaw and the Venetian gondola. It came out of nowhere and nobody minded, except the barangay tanod and the cop on the block who get some kind of franchise fee. And just like the hydra, it morphed into a traffic monster.

But the contraption provided jobs to hundreds some say out-of-the-lam kids (and food on the table for their families). But no matter, the masa and the working class find it safe and useful because it brings them to where they’re going.

Just like the casinos for the haves, this is the have-nots’ mode of transport. The rich have their Mercedez, the less-in-life have their jueteng, why deprive the poor and the daily-ekker a mode of mobility?

Thus, nothwithstanding the idea that being poor means an empty stomach for the longest time that zaps the brain from creative thoughts, the assembler of the lowly Kuliglig has hit a jackpot, a market, by catching on the thousands trickling in from the LRT/MRT behemoths along EDSA and Taft to be conveyed in the capillaries of the Metropolis, Leveriza for instance. The streets of the cities of Manila do not belong to the rich.

Yes, they’re eyesore and air-foulers and traffic gridlockers all right.

But instead of wasting millions on a slogan, why don’t we get some experts going on the Kuliglig: a mechanical engineer, an art designer, a sociologist, a transport guru and let them recommend how Kuliglig should be designed and regulated.

The jurassic Briggs and Stratton motor can be replaced by a dynamo or battery or electric motor available in the market. Compel their drivers to register at City Hall complete with Kay Ganda! or IT’S MORE FUN RIDING A KULIGLIG uniforms, running on designated alleys and streets. We can transform the Kuliglig into a Picasso or a Manansala or a Botong in motion.

The Kuliglig is a work of genius not worthy of being ran aground.

Are we missing something here? Let’s give the poor a break. No more grandstanding against these beneficiaries of the conditional cash transfer.

Let’s not leave social engineering and its ramifications to a dyed-in-the-wool ex-cop. As Jesus “Jess” Trazo said:

the Kuliglig is a manifestation of the well-known filipino inventiveness… so appreciated all over the world, in manufacturing and Mass Production plants… In the Fremont CA facility where TOYOTA assembled their cars, a lot of my friends worked there implementing ways to cut costs and increase efficiency a lot of them filipinos… In shipping, Ship building, almost all the modern day workers employ Filipinos… is the kuliglig challenging some import orieted sectors? Back in the day, Filipino entrepreneurs were encouraged to cut back on dollar spending to only very essential and locally unavailable products… thereby starting a manufacturing revolution similar to Japan’s but because of corruption of later adminiistration the idea seemed to have been lost to the dust bin.