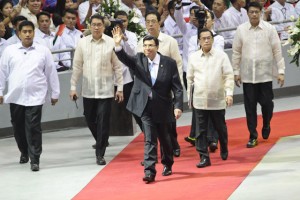 Who won in the impasse?

The Palace says it’s nothing but diplomacy and calibrated approach on an influential religious group that solved the looming crisis. Implicit are undisclosed concessions on how the DOJ shall resolve the criminal complaints up for investigation.

INC on the other hand claims outright victory on its unprecedented show of force. Implicit are demands on resignations of DOJ prosecutors who see probable cause on Isaias Samson’s sworn statements.

Nothing was revealed whether Leila de Lima attended the confrontation or executive instructions were made to remand the complaint of a religious (or expelled member) to the Sanggunian or Ruling Council of INC akin to the College of Cardinals.

The idea of expulsion or excommunication denotes the primary application of the Rules of Faith of INC. This in effect lays down the mechanism of minding your own business within a religion’s territory. Thus, the constitutional divide between the State and religion can be arguably invoked.

This is the first time that the public was allowed to peek at the composition of the Sanggunian. Circa Felix and Erano, nothing was heard about this Council.

Is it akin to Cabinet Ministers ministering the decision making of the Excutive Officer of the Church or Pangkalahatang Tagapamahala or is it any different from the College of Cardinals that picks the next Pope? Felix and Erano never defer to the Sanggunian on major decisions except the mundane upkeep of the Church.

When members of the Manalo Family were expelled, it was the Sanggunian who took the cudgels for the Church. Charges of financial mismanagement and personal aggrandizement shook the INC. No less than the Manalo siblings revealed the fractional divisions and irregularities wracking the Church.

The Sanggunian was forthrightly in the forefront. The entire membership of the Sanggunian was identified. On the ultimate night, to a member, each one of them climbed the stage, showing defined biceps and washboard abs, and harangued the Justice Secretary in their peculiar baritones. They sought legal advice that the expulsion or “detention” was within their rights as a religious organization.

Rules of the Church

They have Rules to impose and the members or officers or ministers have to obey or they are no religion in the first place. If a private corporation has Rules so have they. Companies can terminate employees and subject them to investigation. So are they.

Even the government under the Civil Service Law? Doesn’t the Catholic Church or Eddie Villanueva’s or Mike Velarde’s or Ely Soriano’s have Rules of their own? In other words, once this parameter is established, that is, the ex-ministers were dealt with under their peculiar Rules, the issue becomes a Religious Question (remember the Political Question of yore when Courts shirks its duty to hear a case?).

The Rules were crafted precisely to strenghten faith and religiosity. This is therefore outside the prying eyes of the public prosecutor, unless there is a new law that defines religious detention (remember the Anti-Hazing Law that expanded the crime of physical injuries or homicide? At first blush, no crime is committed where a neophyte is injured or killed in the course of the rules of initiation. Or Violence Against Women and Children, ad nauseam).

The INC will cite the Inquisition of the Catholic Church that no Pope or Cardinal or Bishop was ever indicted. Why indict a member of the Sanggunian? Why don’t we let this phase come to pass as we  allowed the Schisms come to pass?

No doubt the INC Council is worried sick where its fat cats are issued arrest warrants where no bail is recommended. This is the ultimate embarassment.

Ely Soriano, hounded by strings of criminal cases lobbied to the ground by the INC, fled to an unknown destination and evangelizes via Skype.

From Day One, INC has hammered on its flock that their political clout is unbreakable.

It’s suggestions are commands that make one Mayor Erap scurrying in obeisance by giving the religious group a carte blanche rally permit. They took advantage of the long holiday (National Heroes Day and the Death Anniversary of Erano Manalo).

Starting out at Padre Faura brandishing Erap’s pass, they decamped at Crossing until August 30 and harassed the Mandaluyong Mayor (plus millions of commuters). With their vocal chords giving up, the elite ministers exhorted their hundreds of followers (who were looking forward to report for work on Tuesday, September 1st) to stay put until Friday, September 5, kuno.

This is the best bluff of the evening. By making it appear that they’re staying until kingdom come, they expect Malacanang or De Lima to blink. Smarting from fatigue, the INC rejoiced when it says that the government granted its requests. What those requests were, no particulars were announced.

One variable that augurs well to the religious sect is the GMA hold-out majority in the Supreme Court. Lately, this majority sent a message to the President that being a lameduck executive, he could no longer threaten them with impeachment.

The Enrile Decision is a payback ruling meant to thumb the nose of the President. For the last five years with the Corona Template, the President was a nightmare to the eight justices. With eight more months in office, the eight bailed Enrile out from hospital detention.

The message is clear. By liberating Enrile, it is business as usual at the SC. “Your Daang Matuwid stinks and we of course will not toe the line.”

Embedded in the Answer of the Sanggunian against the criminal lament of Samson is the tack of Religious Question.

INC lawyers will theorize that the DOJ has no power to investigate a purely religious disciplinary action against erring members. “You can invoke the Fourth Commandment when the Pangkalahatang Tagapangasiwa expelled his mother from the Faith, for all we care.”But these holy men of the Sanggunian are outside your ambit. This defense will be brushed aside by de Lima, of course. INC goes to the SC and seeks injunction.

If JPE got it, why not a religion who is now openly on collision course with a bowing out President?

AN OPEN LETTER TO DR. MARICAR REYES by Aila Lenard