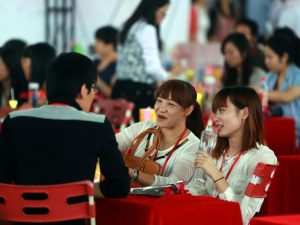 For some it may be classed as ‘three-timing’, but in one Chinese city having three girlfriends is apparently seen as the norm.

One man from the city of Dongguan, in China’s Guangdong province, has even told media it would be “embarrassing” to have only one girlfriend.

But in the Cities of Davao and Manila, this practice is old hat. Erap has seven legits while Duterte has three regulars and two endos. Now that he is President, Duterte has a dozen co-terminus.

Asked if he had advised the President not to respond to Edgar Matobato’s allegations, Sal Panelo said: “You know, you don’t even have to advise this President. He’s such a smart, intelligent thinking lawyer President. That’s not necessary.”

Sal Panelo has a sense of humor…humoring his President. Btw, folks, the phrase “smart, intelligent thinking lawyer” is an oxymoron.

The Sandiganbayan’s Fourth Division granted the separate demurrers to evidence filed by Arroyo and her husband, Jose Miguel Arroyo, and former Commission on Elections Chair Benjamin Abalos, who were also absolved of the charges on Friday.

“We are thankful to the Sandiganbayan for granting our demurrers in the three ZTE cases. It’s a well-reasoned decision. I encourage the public to read it,” GMA lawyer said.

Who wants to read kilometric decisions like this especially one that was ghost written by Estelito Mendoza himself? The public is not used to reading anymore since May, 2016. They prefer auditory exhibitions like gunfire and shootouts.

“Cayetano’s conversion into a born-again advocate of due process and the rule of law is hilarious, considering that he lawyered for the accusers of VP Binay during the blue ribbon subcommittee hearings,” Binay Spokesman Salgado said.

He, however, gave credit to Trillanes for his consistency.

“At least, Trillanes was true to form as the session hall bully, this time intimidating his erstwhile BFF. These two deserve each other,” Salgado added. 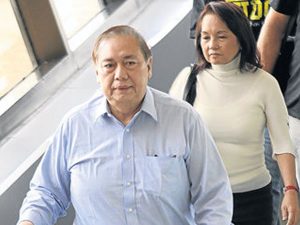 Mike Arroyo, the ex-FG, is likewise seen with Cayetano in a tight embrace while GMA was behind waiting for the beso-beso. Actually, during the senate hearing, Nancy was seen rooting for Trillanes to sock the guy from Taguig. “Sana upakan ni Sonny. Titili yan, promise.” On hearing this Koko’s eyebrows were seen raised while Pinky’s arms were in akimbo.

President Rodrigo R. Duterte has approved the rollout of nine infrastructure projects worth over P171 billion barely 100 days since he assumed office as the administration wants to impress foreign investors whose interest may waver amid international bad press that the President has been getting, the country’s chief economist said Thursday. 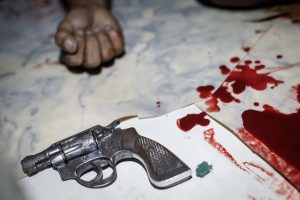 A revolver gun is seen next to a body of an alleged drug pusher and user who was killed in an operation of the police in Manila, Philippines, 12 July 2016. The number of traffickers killed in the Philippines since President Rodrigo Duterte won the elections has increased by more than 200 percent, according to police data. Photo by Mark Cristino/EPA

He also announced the imposition of adjusted special levy on MANUFACTURERS of PALTIK in DANAO as their sales skyrocketed barely 100 days since he assumed office. “Mabenta yung .38 caliber revolver..”

Jojo Binay perfected the art of stealing in Makati.

We are now seeing a perfect Duterte GARRISON STATE where Congress the AFP PNP SC act in synchronicity. MATOBATO has no place to hide.

Tito Sotto, who can not hide his curiosity, asked Gen. Bato and Edgar Matobato if they’re from CotaBATO?

TOUCHING BASE ON CHRISTMAS….