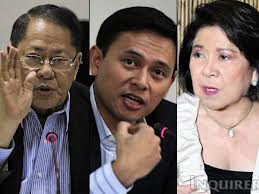 Suddenly it dawned on us that the APECO law is poised to kill hundreds of people in Aurora. By the expedient of legislating economic progress, the Angaras are driving away indigenous people and legitimate land owners from their livelihood.

While the Ampatuans actually pulled the trigger, the Angaras are into a “white collar” massacre. Bella Angara was heard saying in a radio interview, “alam namin ang aming guinagawa dahil kaming tatlo (her brother Ed and nephew Sonny) ay mga abogado.” Look how self-absorbed these dynasts are. What a way to end an argument.

For his part, the young Angara made a tortuous defense of the law that the Angaras have lilywhite reputation and we should sleep tight at night and leave them be in implementing the law. “Ang mga Angara po ay hindi nasangkot sa kahit anong kaso ng katiwalian.”

When we allow feudal families to rule the roost, our development goes askew. They have their own idea on how to transform their fiefdom as an economic haven. This is autonomy gone wild. Just because Aurora is facing the Pacific, it qualifies the location as an economic zone comparable to Hong Kong or Kaohsiung. There are myriad items in the checklist to satisfy whether an area is investment-conducive among which is climate. We know that Aurora is visited by typhoons the whole year round. Would this encourage locators to invest in a typhoon belt?  That is why President Marcos envisioned the NEDA as the central economic think tank on what is best in a certain location, CALABARZON, for one. By all indications however the Angaras have an ally in Malacanang who in a bit of nostalgia admitted in all candor that he voted in favor of the law when he was still a novato in the Senate trying to learn its ropes. It looks like the patriarch Angara wanted a parallel Port Irene, JPE’s monarchy in the North, which was delivered on a silver platter by Erap and GMA to the latter. Port Irene or the Cagayan Special Economic Zone and Freeport (CSEZF) in Santa Ana, Cagayan has a controversial locator, the Meridien Vista Gaming Corp. (MVGC) who operates a Jai Alai fronton and beams the results via local cable and internet. Bookies in Northern Luzon have sprouted and use the off fronton results as jueteng hybrid. In a PDI report,

Raul Banderas, spokesperson for the Meridien Vista Gaming Corp. (MVGC), blamed “jueteng” syndicates behind the “unrelenting and erroneous” campaign that is meant to supposedly tarnish the image of the company.

“We are investors in the Philippines who wish to do business legally but why are we being pilloried?” Banderas said in a statement.

He accused the “real gambling lords” to be behind the smear campaign against MVGC’s jai alai games.

“[They] were threatened by the resurgence of highly computerized betting games, including jai alai, which they feel will eventually kill jueteng,” Banderas said.

MVGC runs jai alai games played at the CSEZF and its spin-off numbers game that is operated in many provinces in Luzon, using a license issued by the Cagayan Economic Zone Authority (Ceza).

Why do dynasties have the penchant of portraying themselves or their family members as exceptional?

All dynasties talk about “outstanding cut above the rest godlike” reputation. The Ampatuans believe that they are Allah’s best gift to Maguindanao while the Binays are in paroxysm for having been elected over and over again drawing the vox populi argument.

When one family rules a province (town or city) for the longest time its members soon hallucinate that they were chosen by divine destiny. Danny Suarez of the Bondoc Peninsula debunks criticism that he’s into dynasty-building claiming their hold on to power in the Province of Quezon is “destiny, not dynasty” and this has been mouthed all over by the likes of the Villafuertes, Puentebellas, Dimaporos, Gatchalians, Talagas, Singsons, Enriles, Estradas, etc. who have made politics their family enterprise.

Just to drive home the point of how our local elections have evolved this far, the Talagas of Lucena, Quezon have fielded eight family members  as candidates in the 2013 elections!

As respite from this disaster, and hopefully relief, I have listed below candidates with no known relatives in the government whether elected or appointed whom I shall support in next year’s poll. With their election, the people send a message that an anti-dynasty law (which has languished for the past 26 years) should be passed (like the RH bill) as urgent:

A DAY IN THE LIFE OF A BENCH BIDDER

Thanks, But No Thanks